We are heading to Chernobyl area. This photo-reportage is an account of the two-day trip through dead zone in spring 2018. 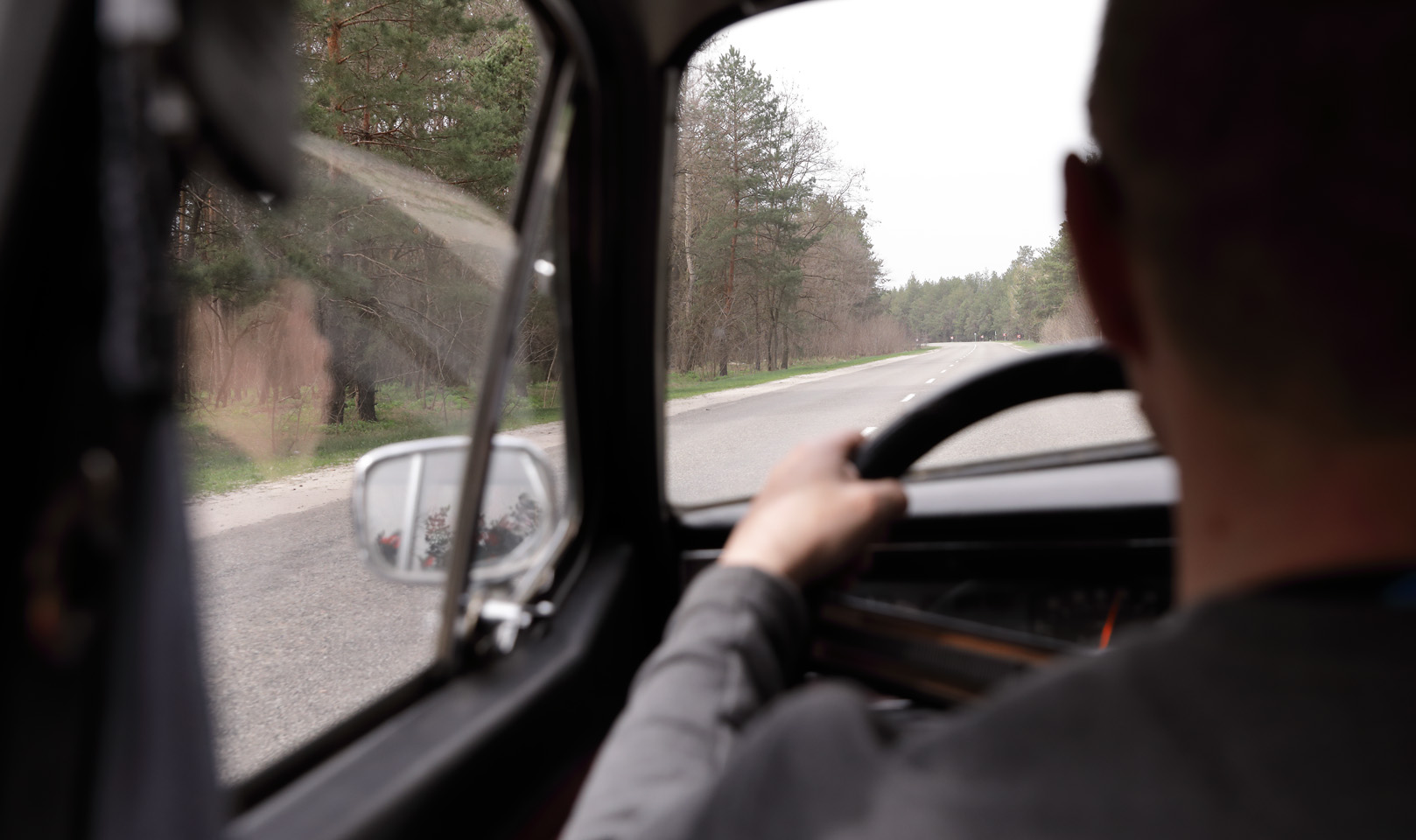 I cannot post photographs of guys from my group, because some still blacklisted by authorities. Persona non grata is a title society grant us for disturbing their ignorant slumber. To us, it is some kind of honor to be on black list. 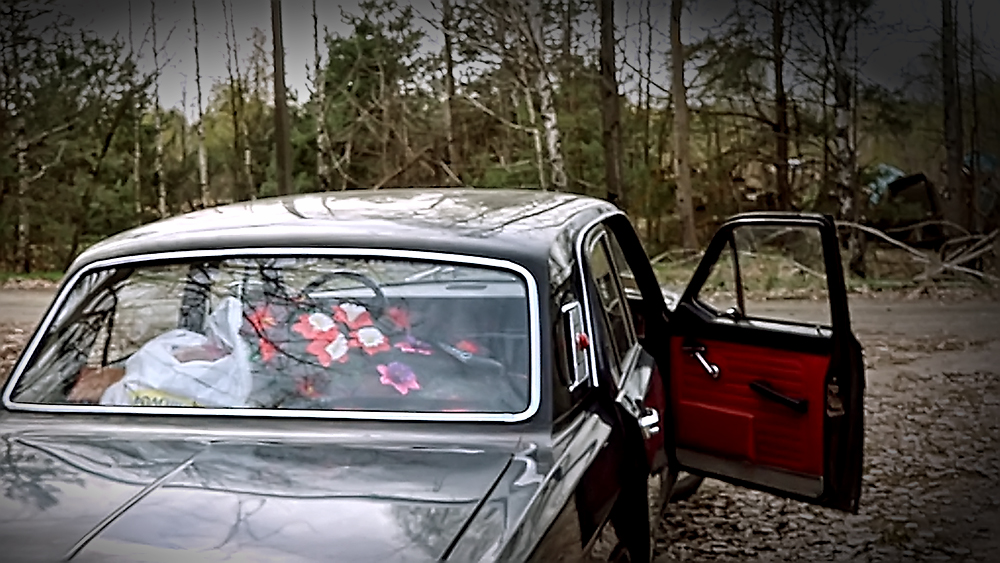 From the outside, our car looks like a mid-20th century funeral vehicle. When someone sees this car in the wasteland they think we either visiting relatives in the graveyard or we are a funeral service. They usually let us pass and don't ask any questions. Death is something that people tend to ignore near Chernobyl as the region is an endless funeral procession that people turned their backs on years ago. 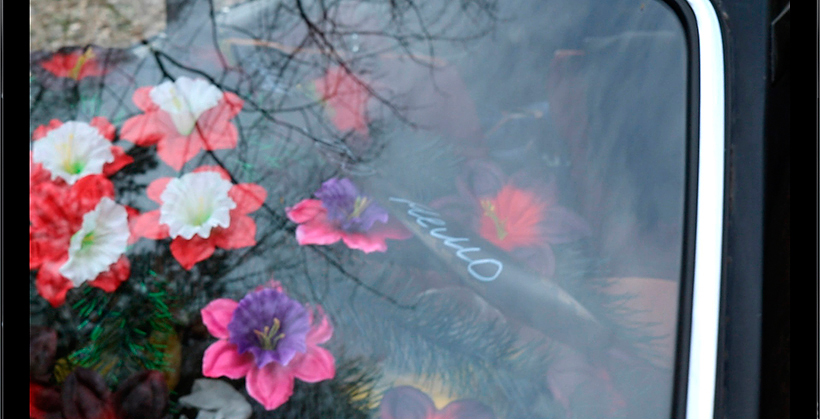 Inside, our car is decorated with flowers. Nemo in Latin means "no one." 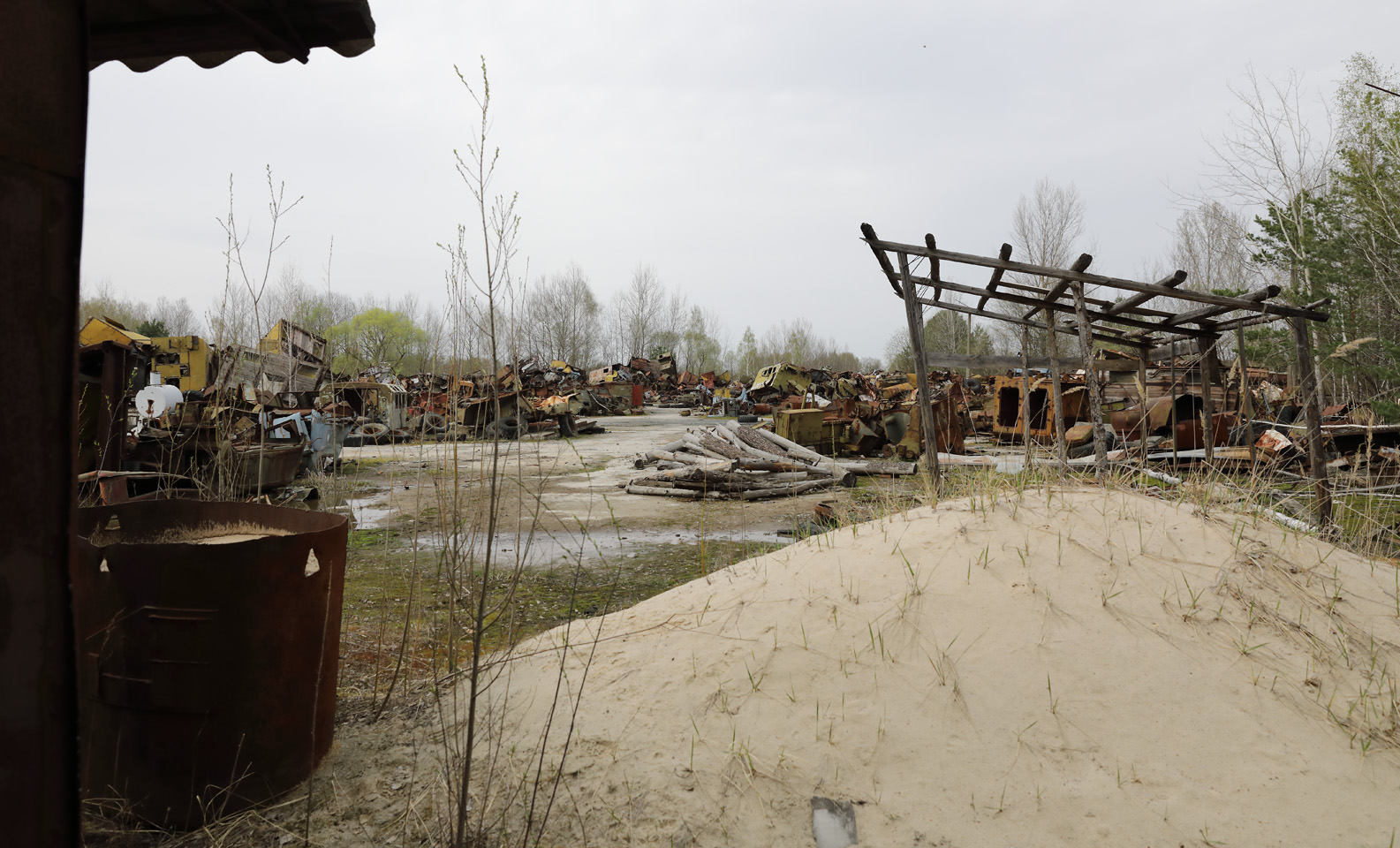 We decided to spend first day visiting Chernobyl radioactive junkyards. Our driver has maniacal devotion to those places.

Here I am wondering where is radiation.

On this video, I am telling my friends, that the glow-in-the-dark frogs of Chernobyl are laughing at us, because we arrived to Chernie with an uncalibrated geiger counter. I just replaced tube on it and I expected service to calibrate my geiger counter - but they probably forgot. On low levels of radiation it was not noticable, but as radiation levels rise, geiger counter just lived a life of it's own, with no regard for the safety of ours.

I never cared for Sieverts, but after Fukushima all videos from Japan show us readings in this system. I originally learned to operate with Sieverts by parallel reading from two counters at the same time. To me it was very useful, as for tailor to have inches and centimeters on the same tape measure.

Trip to those tanks cost us a pair of shoes.

We can see how fast red Inspector on right gaining speed from reading hot particle radiation in CPM (counts per minute) mode. A level already 1200 more than normal, while improperly calibrated white device only shows 31 times more than normal. One can get fried like chicken while the slower device can't see the danger.

This reminds me of an anecdote about two cats, who went on a Girls Night Out: One cat is completely blind and the other has only one eye. Blind cat whispers to her friend, "When you see some cute boys say, 'HOT DAMN!". "Ok," says the one-eyed cat. As she walks into a branch and puts out her one good eye "GOD DAMN!" she exclaims ...and the blind cat smiles broadly and says, "HELLO, BOYS!"

I guess it is time for me to say 'Hello, Boys!' too, because my friend the white "Inspector" is completely blind. 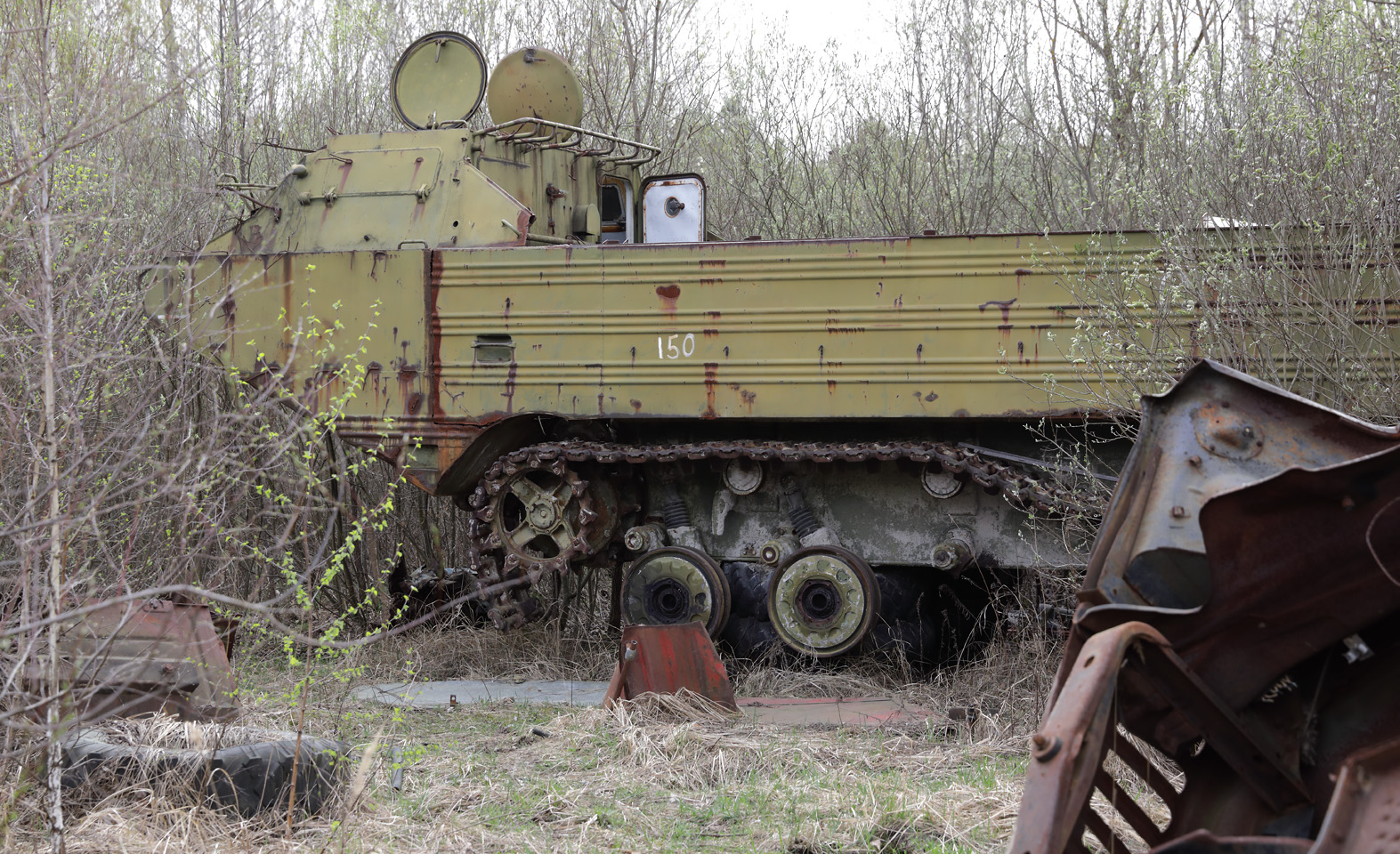 Quite possibly, these are the same army vehicles we see on 1986 documentaries. They were driving on the site of destroying a reactor, covered with reactor core. Some of its particles are still trapped on and in those vehicles. If someone is unlucky to encounter even a bit of graphite the size of a grain of sand, this would send a Geiger counter off the scale. Its operating range is only from zero to 0.11 Roentgens. 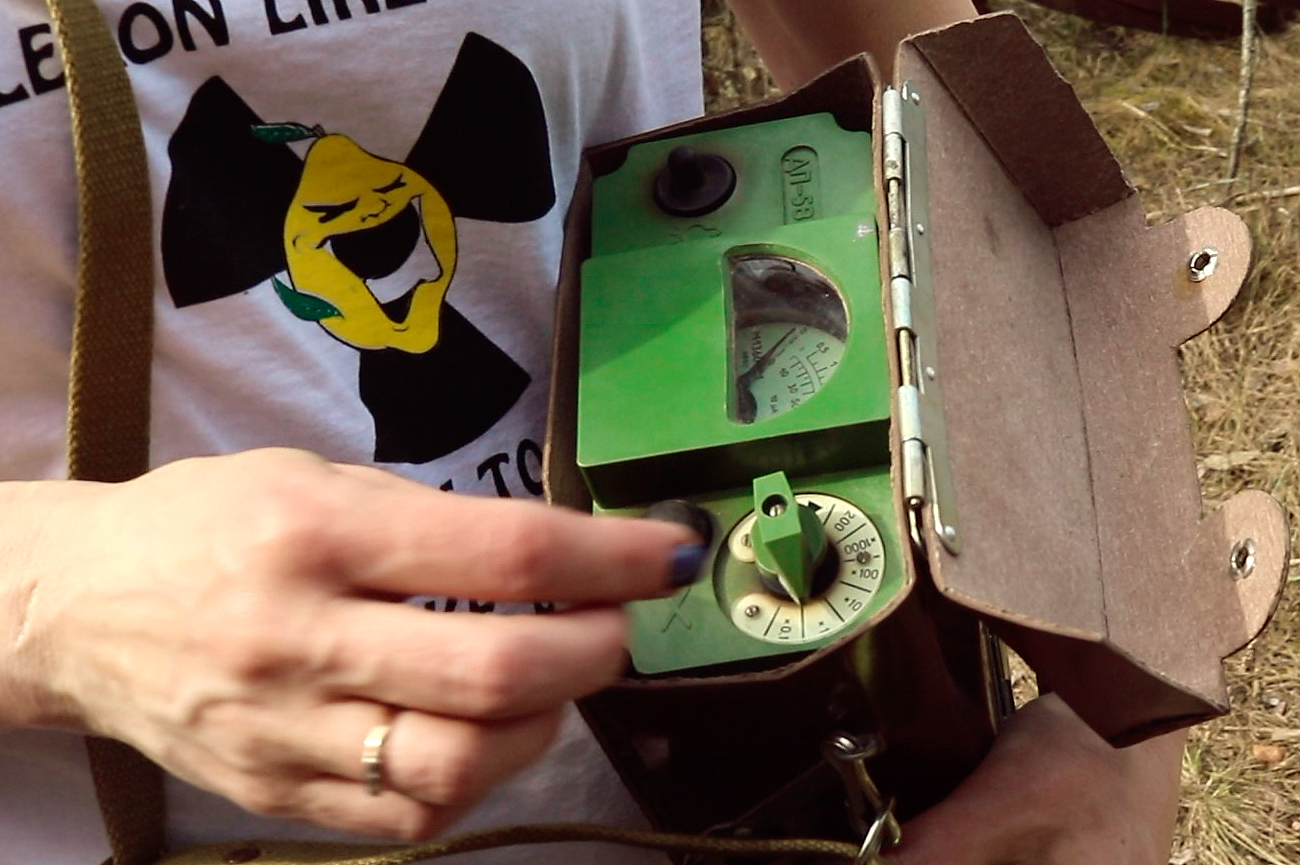 With a Geiger counter off the scale, you never know, when you will be knocking on Heaven's door: It's better to run or to get this army geiger-counter from soviet-era. Its operating range is from 0 to 200 Roentgens. It was developed for atomic war. 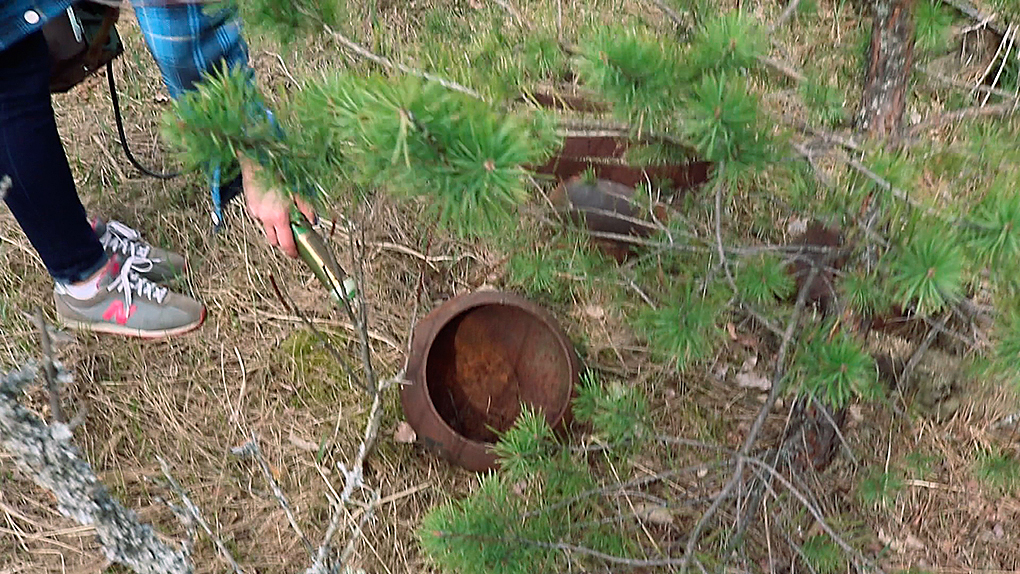 If someone happens to see this DP-5 counter off the scale, next thing they gonna see will be white ceiling in a hospital ward. 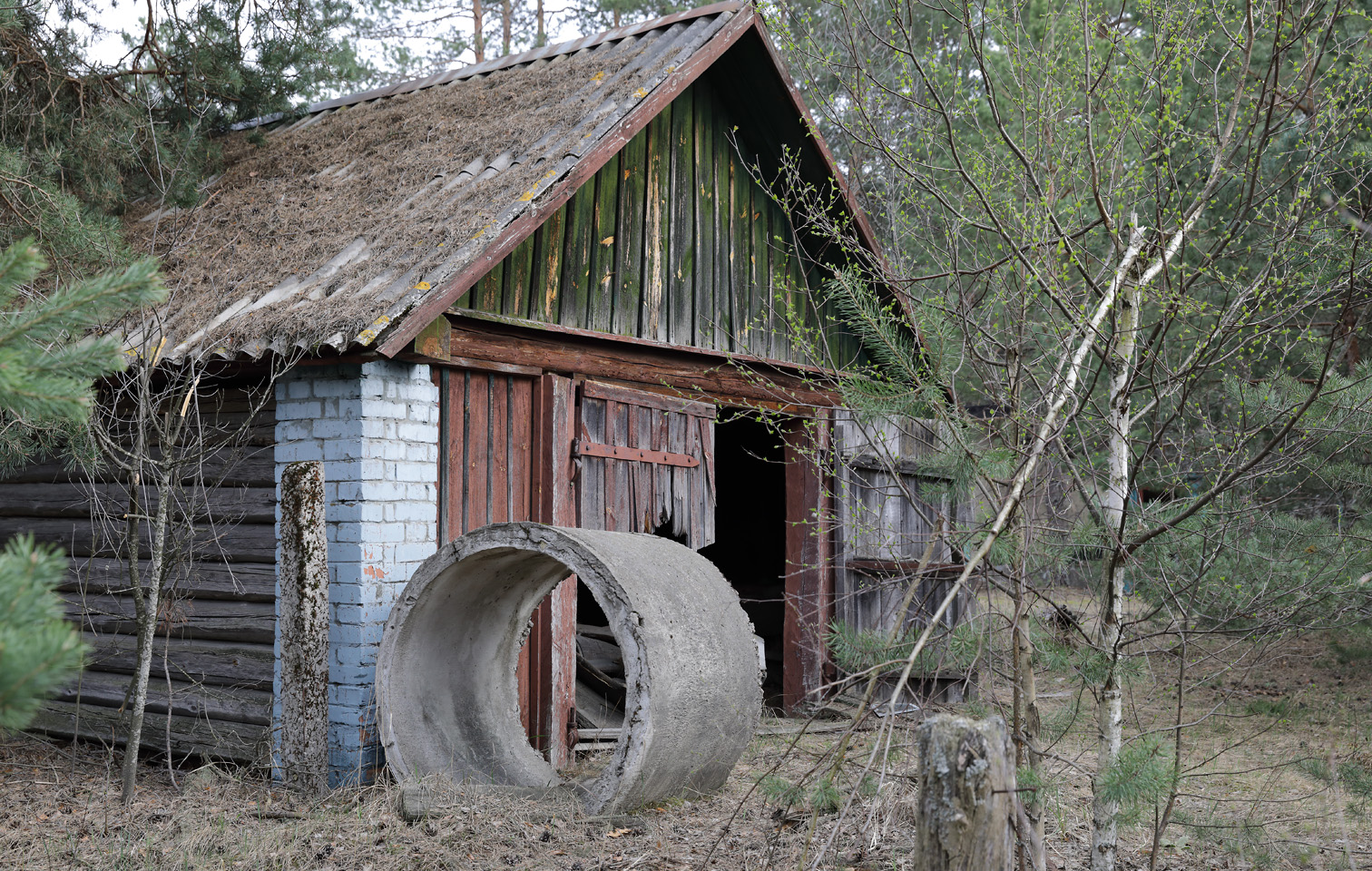 This Soviet-Army geiger-counter is very cheap, reliable and simple. It was made 54 years ago for the army, which means that someone as dumb as this concrete sewage pipe can operate this device. It works well to inform about dangerous levels of radiation, but with this army device you can only hear leading tunes from gamma and beta, not the whole orchestra. With nuclear isotopes it goes like with a symphony orchestra. Different instruments go into play either one after another or all together. With couple of modern Geiger counters and proper knowledge it is possible to tell what isotopes coming into play. This is very interesting science. The higher is radiation the more interesting it gets. 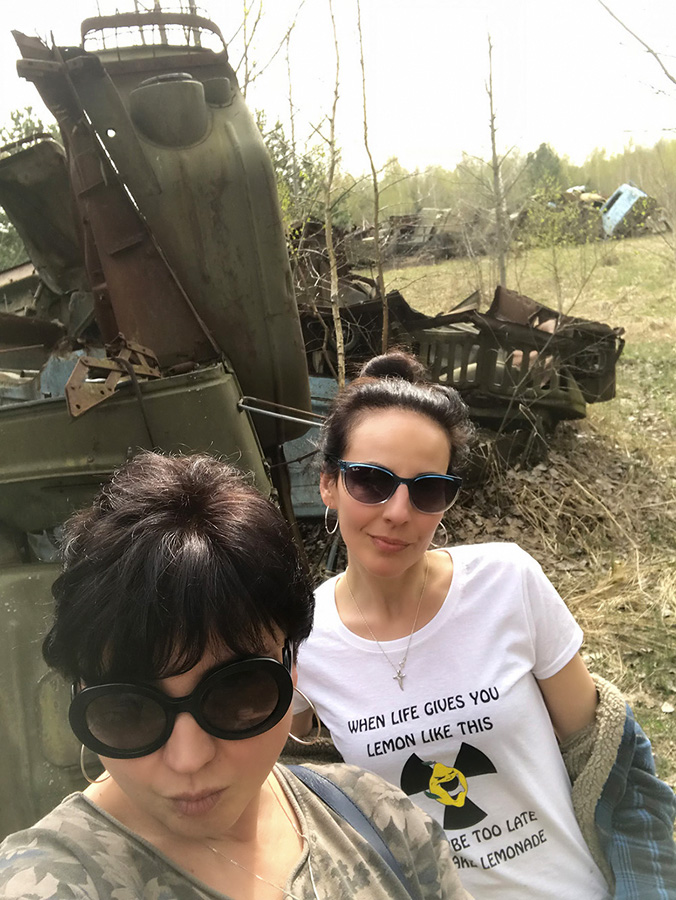 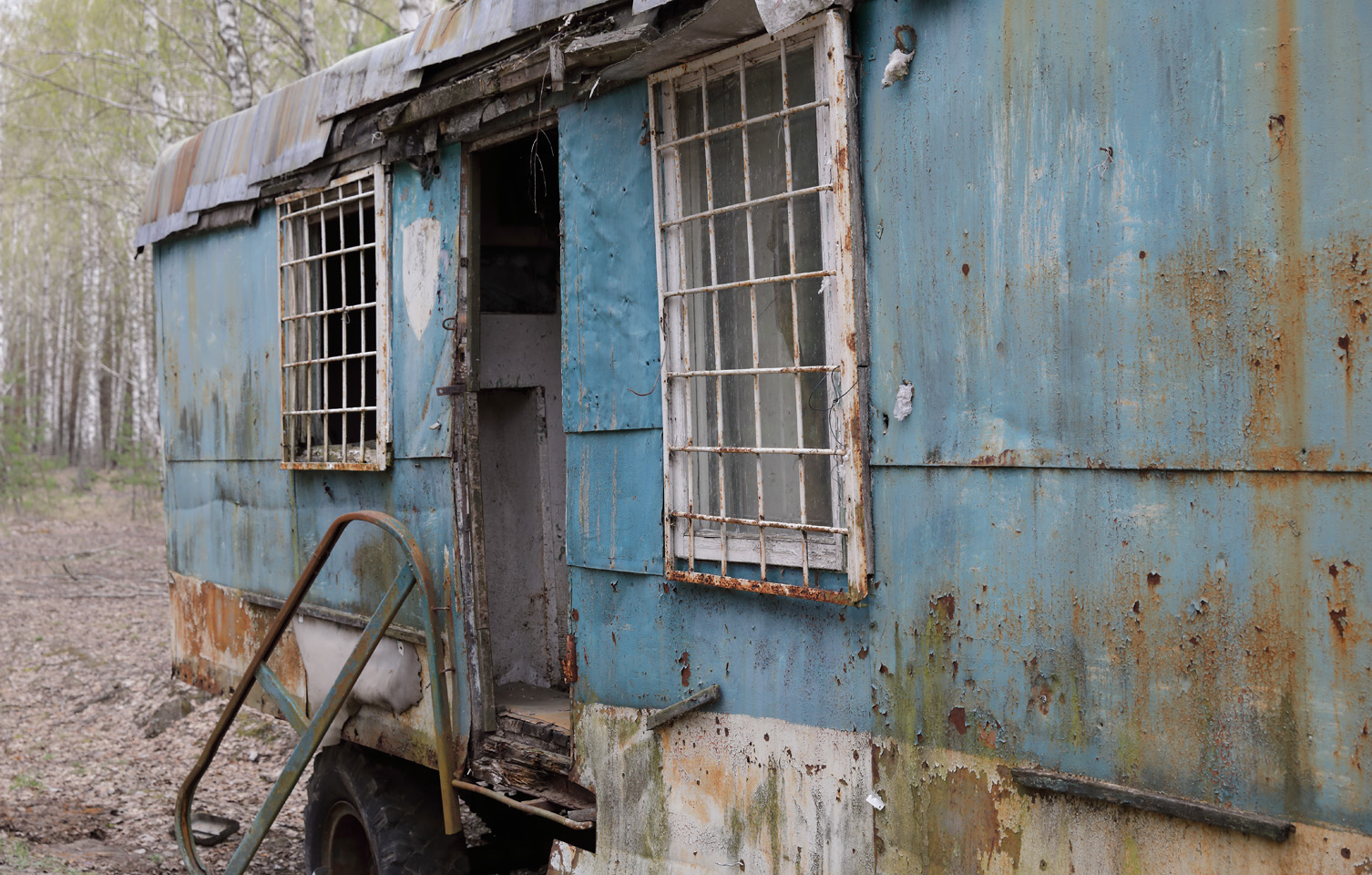 Looks like this junkyard was watched over. This is where guards lived and I guess iron bars were guarding the guards... a prison on wheels where mere bars can not stop invisible intruders of radioactive decay. 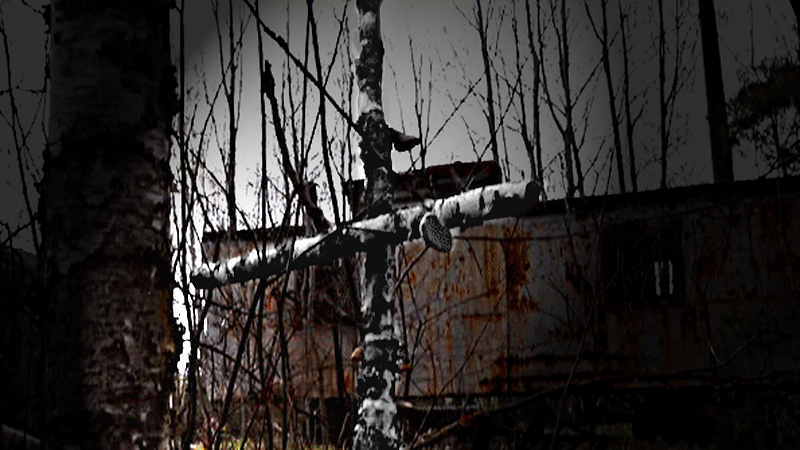 This is prison on wheels from the other side. Nature never doublespeak or makes subtle points, it always speaks a firm and clear language, giving signs like this one. 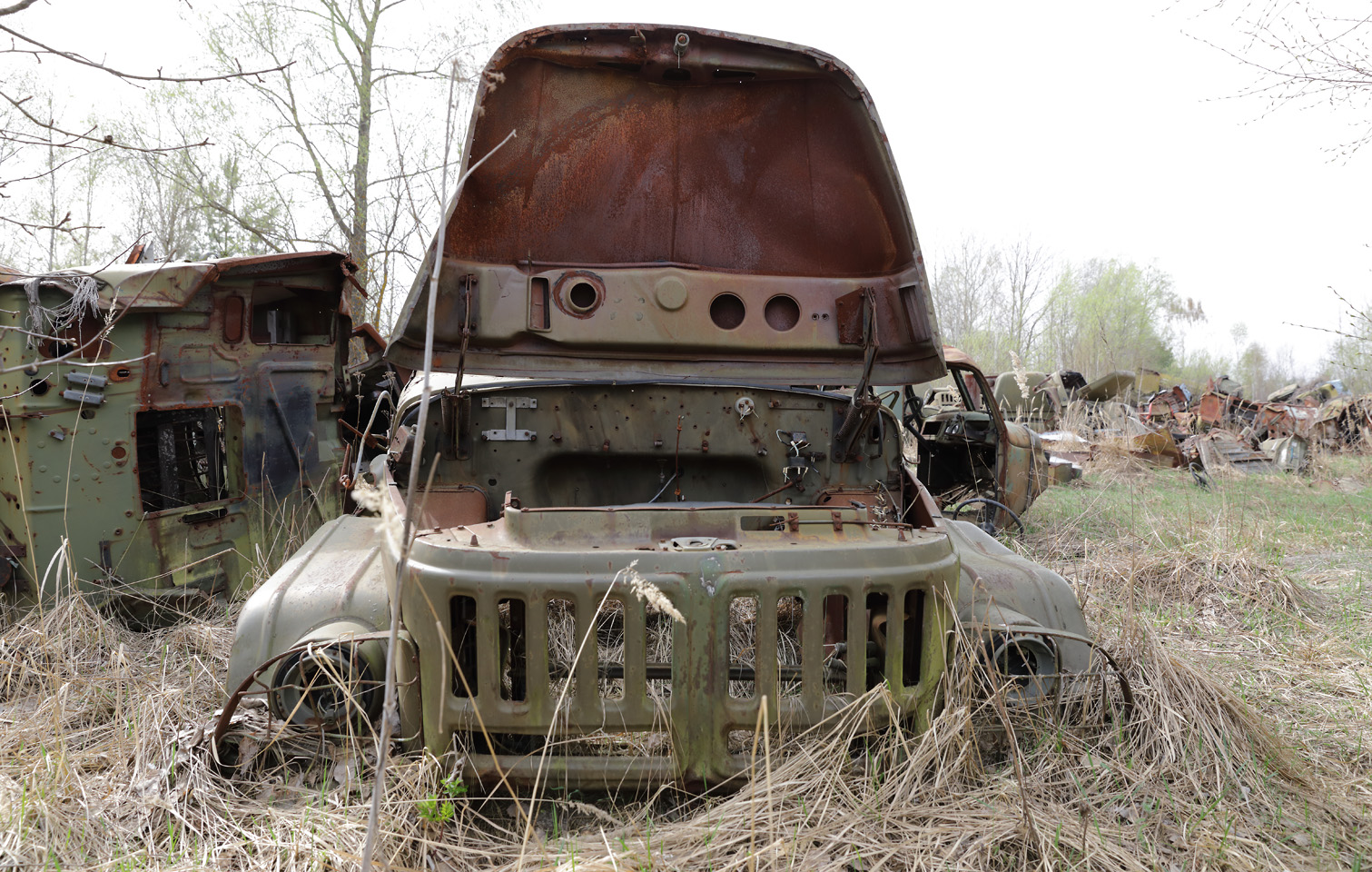 Scrappers nowhere to be seen. They must have day off today. 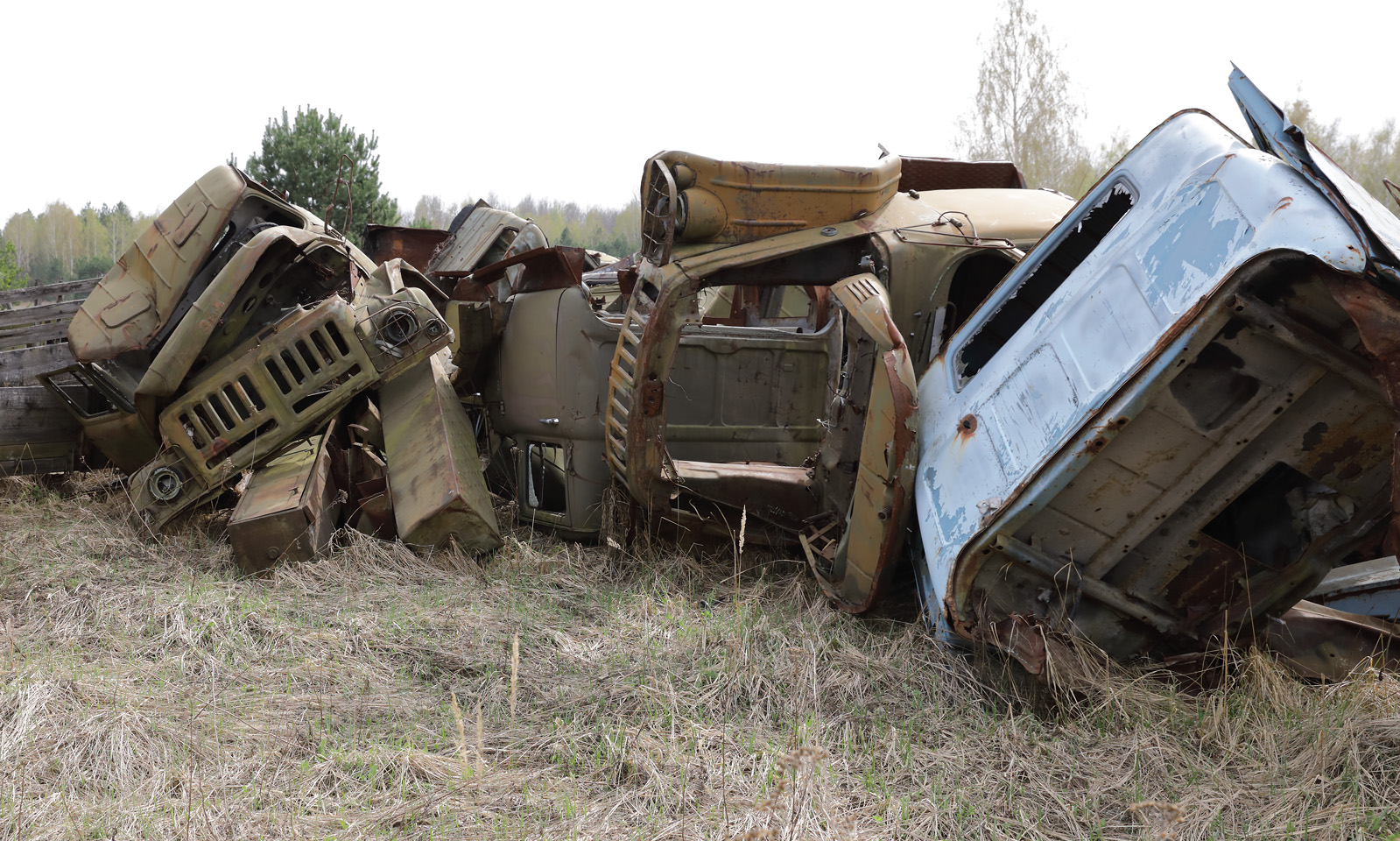 By removing easy detachable parts, previous generations of scrap-metal collectors have picked most of low hanging fruits in this poisoned garden. 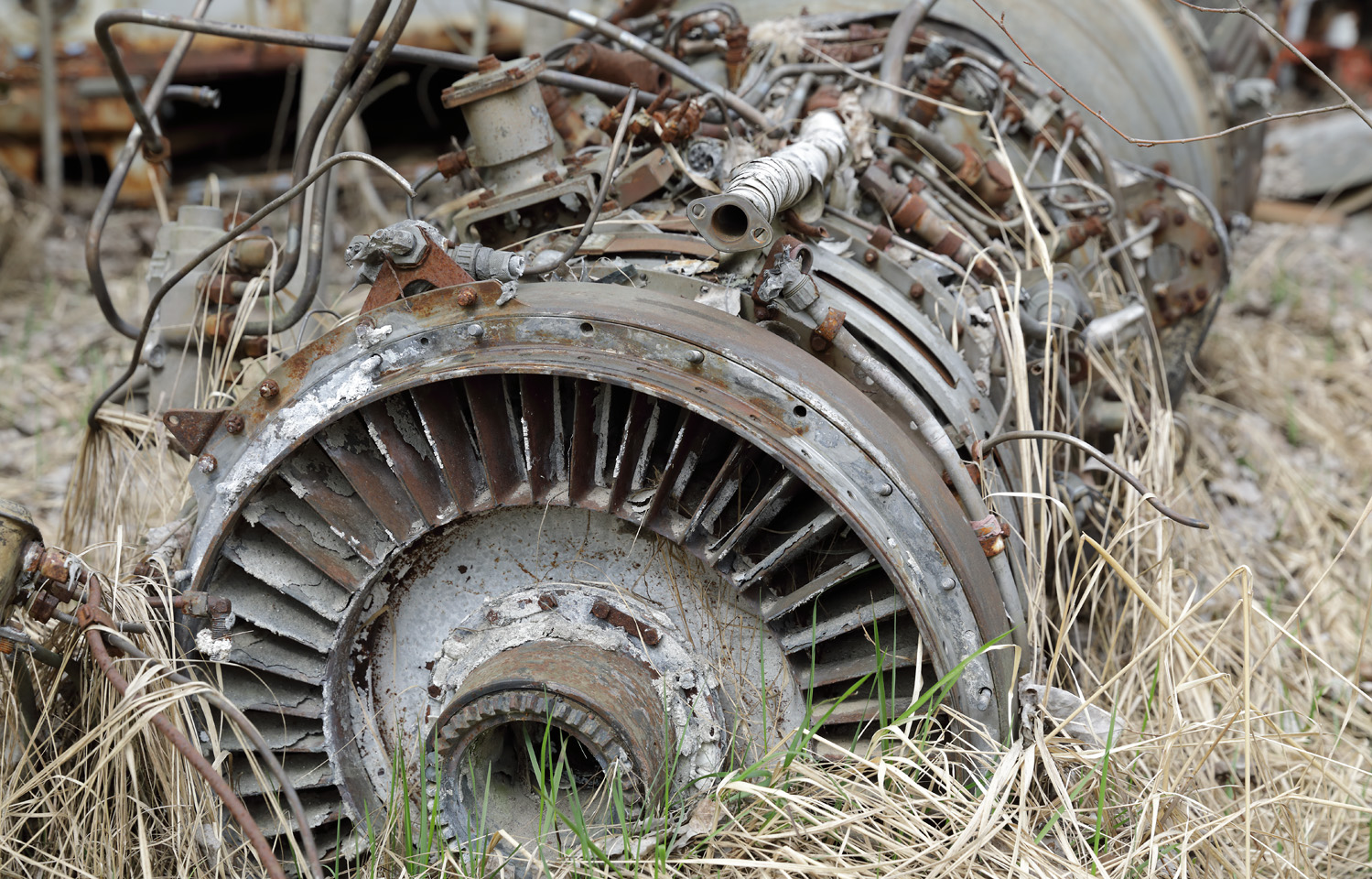 Now they have to cut body of a car apart, or take apart their motors, to get to the valuable metal. 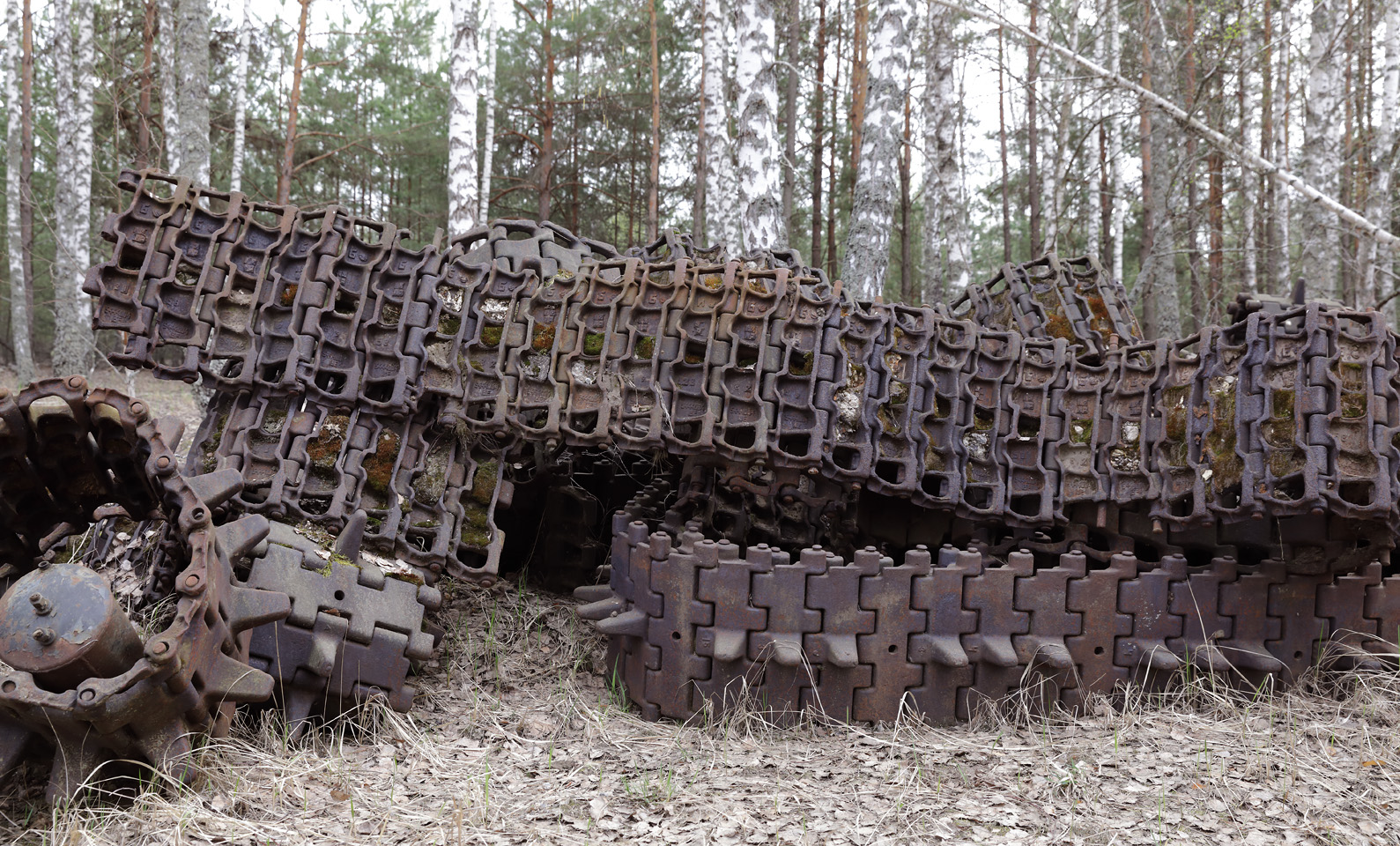 When I mention previous generations of scrappers, I mean those who worked on a field couple of years ago. The life expectancy of scrap-metal collectors is lowest in the zone. Usually they become "Nemo" after couple of years of work in a field, but on this field I don't think they will last that long. 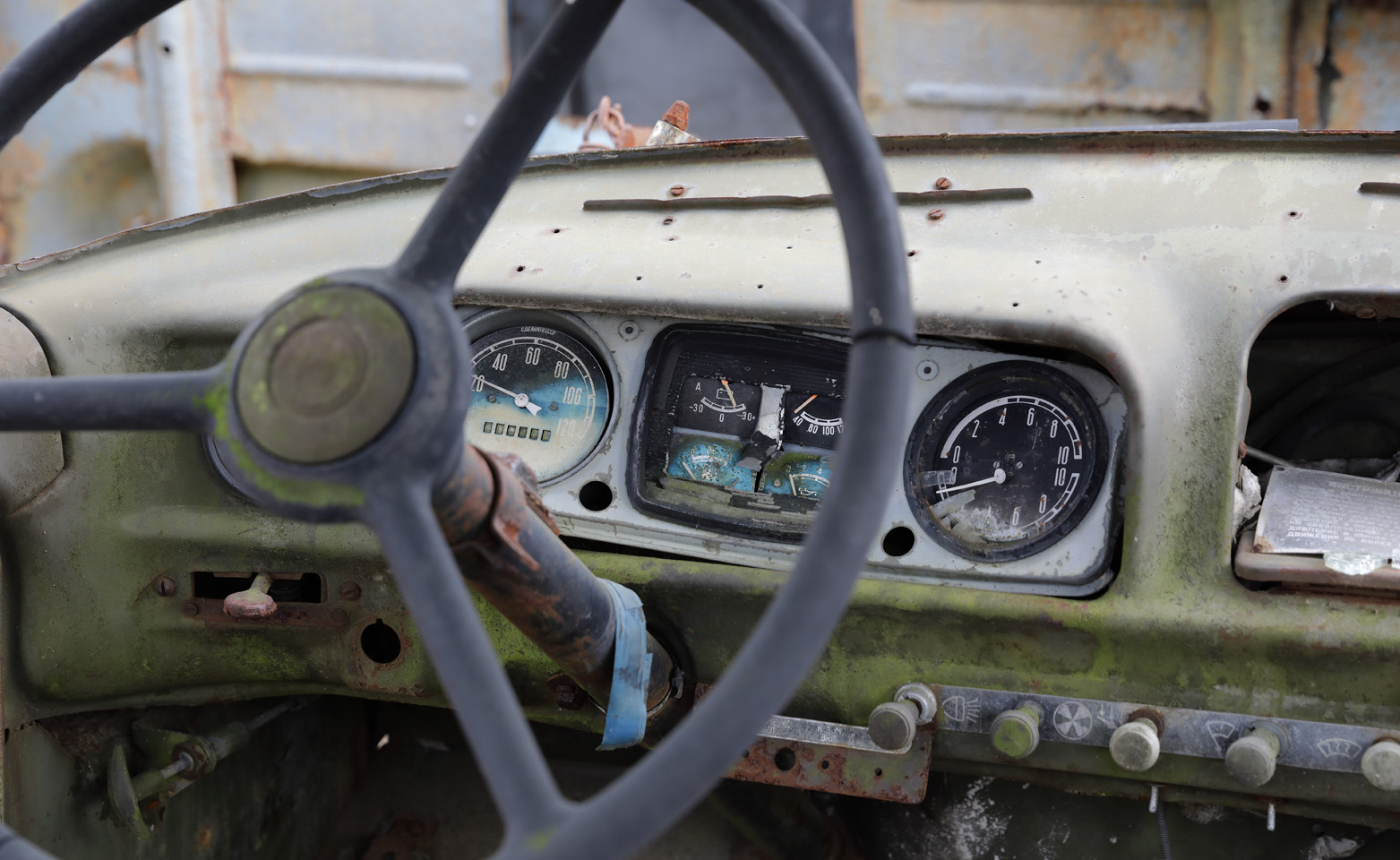 Radiation damage to our bodies is accumulative, so everyone who explores Chernobyl and now Fukushima starts spending unrenewable health capital that nature provided us for whole lives. It is prudent to start spending this capital little by little and increase spending it with years. When I was young, I would never go to such places as this junkyard and I would never take my daughter to this place, but my father is now 81 years old and he has more of this capital left than years to live. So he can go to places with much higher radiation. The rule is simple: Microroentgens for the young, milliroentgens for adult and roentgens for old. 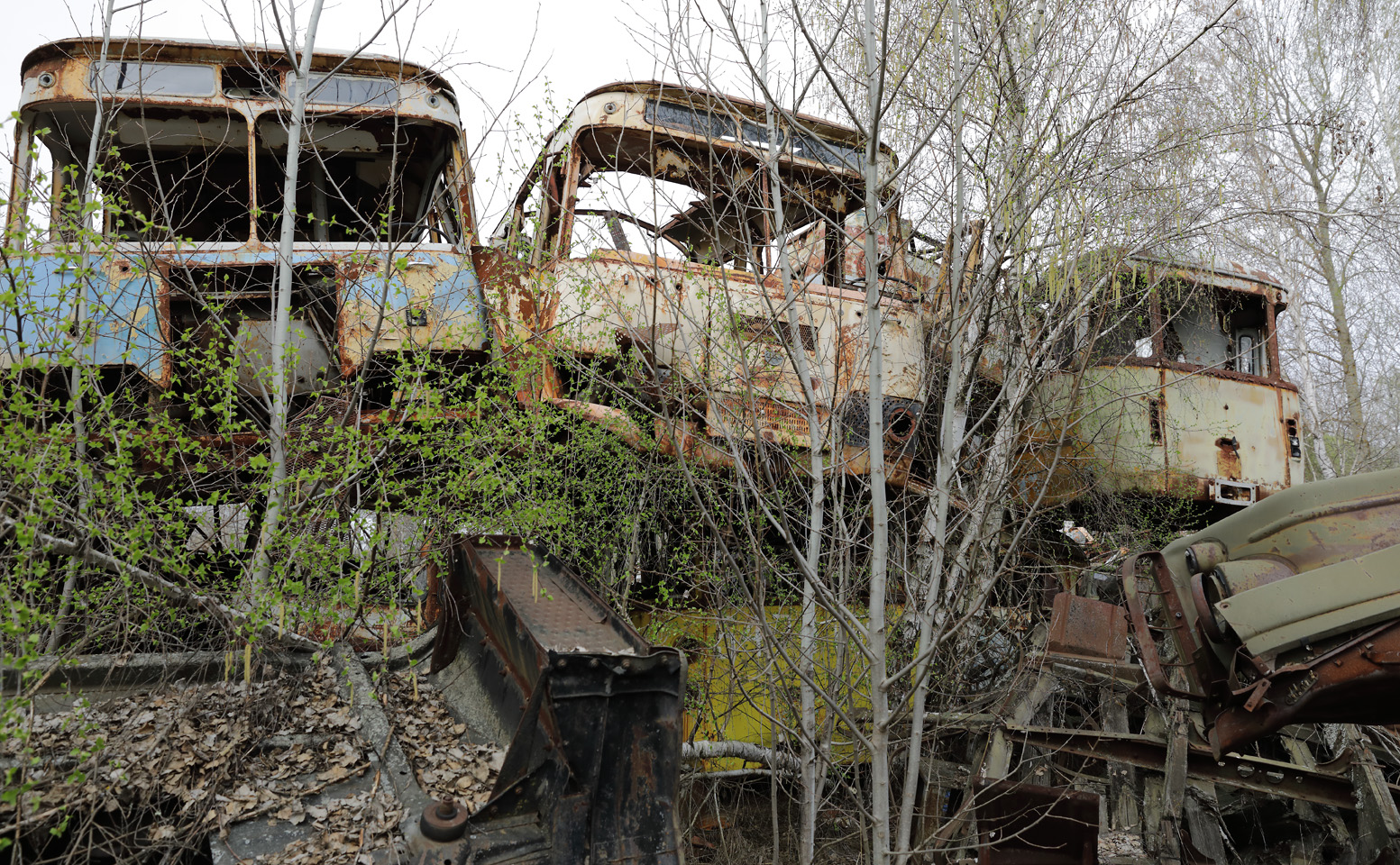 In the first days after Chernobyl explosion my parents spent half a day waiting for the bus to go to their dacha (summer home). It was difficult to catch a bus in Kiev. Authorities had sent most busses to Chernobyl, but people didn't know it. The massive radiation escape was still a state-secret and people on the street unknowingly paraphrased an old folksinger's lament when they asked each other, 'Where have all the busses gone?'

Maybe one of those busses is the very one that my parents were waiting for that day... 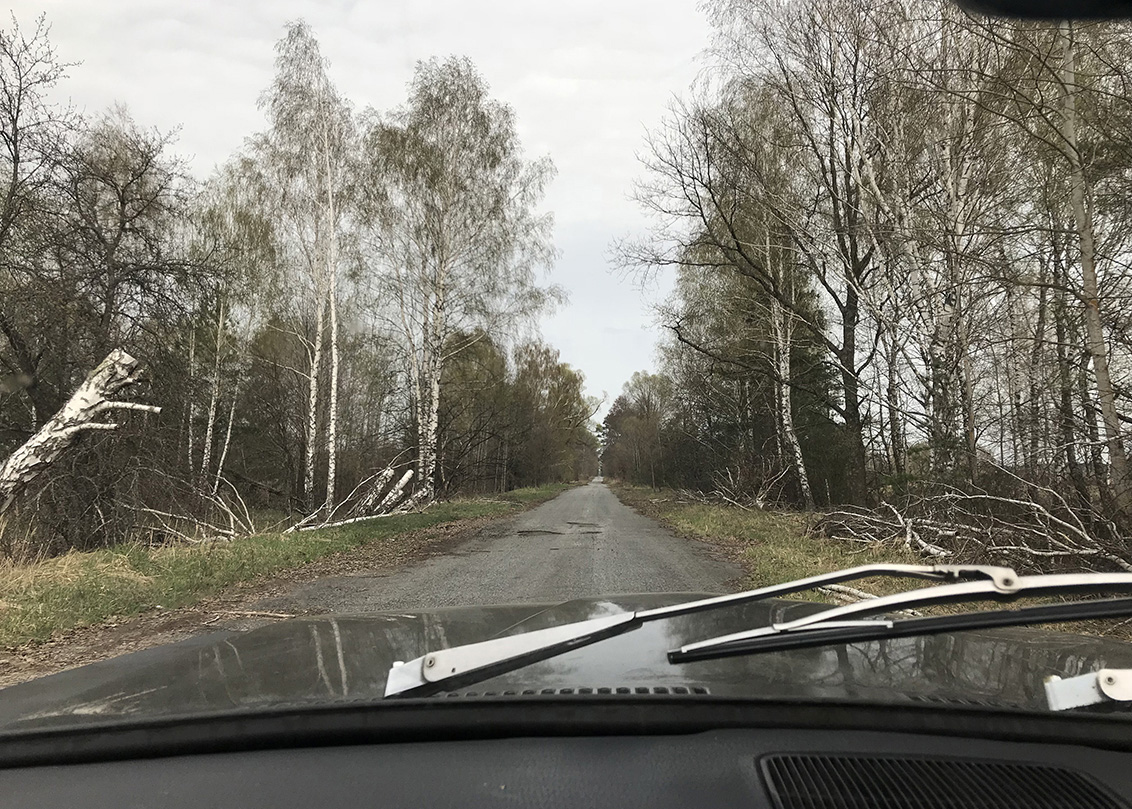 It is time to leave junkyard and go to see other places. The road is already cleaned from fallen trees. Today our driver is in charge, it is his program, which places to visit. He is self taught, so when he is running a show, everyone gets tense and receives a double dose of adrenaline. Nuclear is the kind of training, where ones first steps can also be ones last steps, so there is a sense in which a self trained nuclear enthusiast is a bit like an amateur sapper. 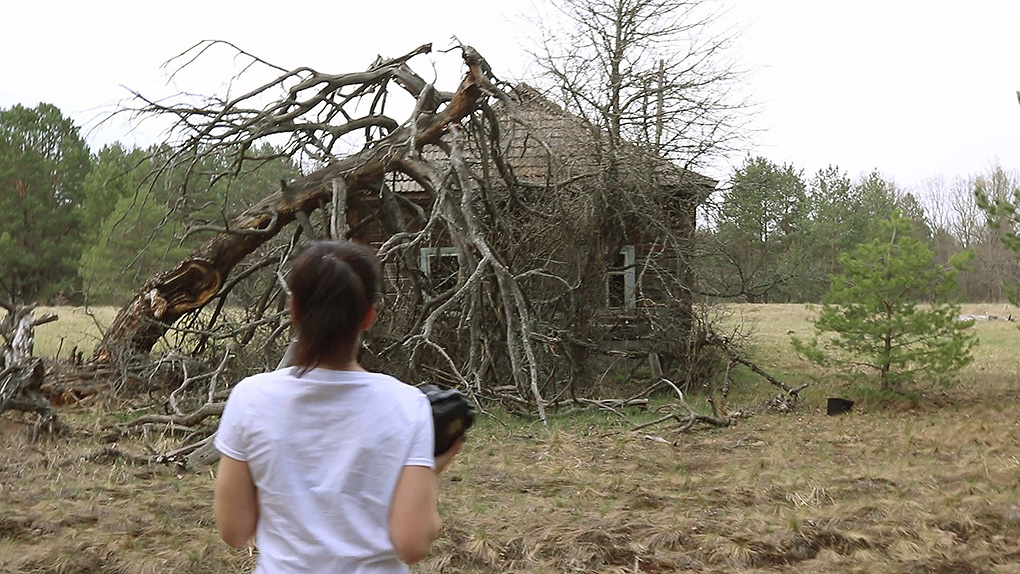 Me trying to guess whose house it could be. It stands apart, but it doesn't look like a forest-guard house which usually have sheds around them. In Soviet times authorities settled people close to each other. This way, it was easier to control them. Everyone was keeping an eye on each other. The only people who didn't want to mingle with others were those same authorities. My guess this was dacha of someone important. 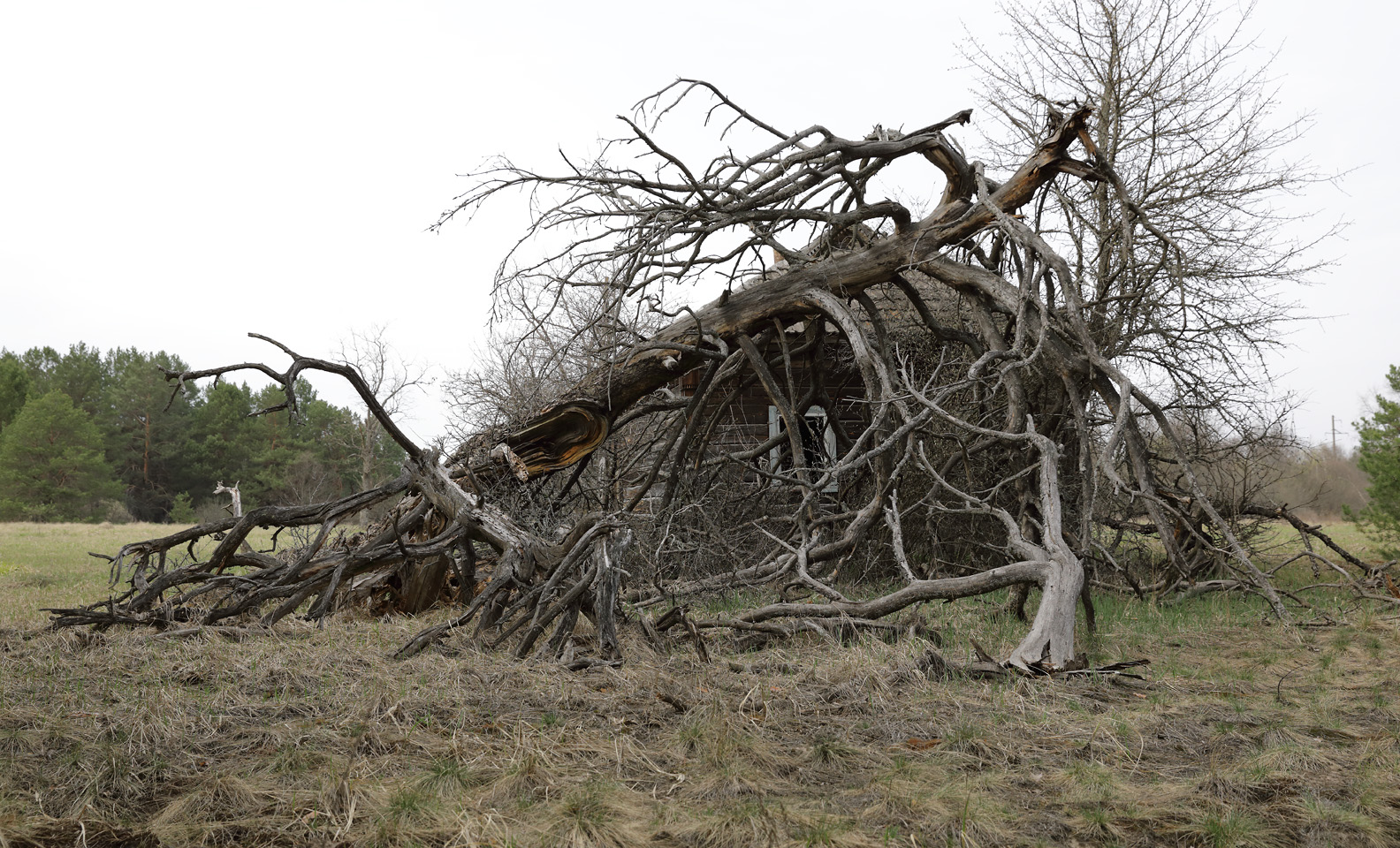 Here is this house from other projection. 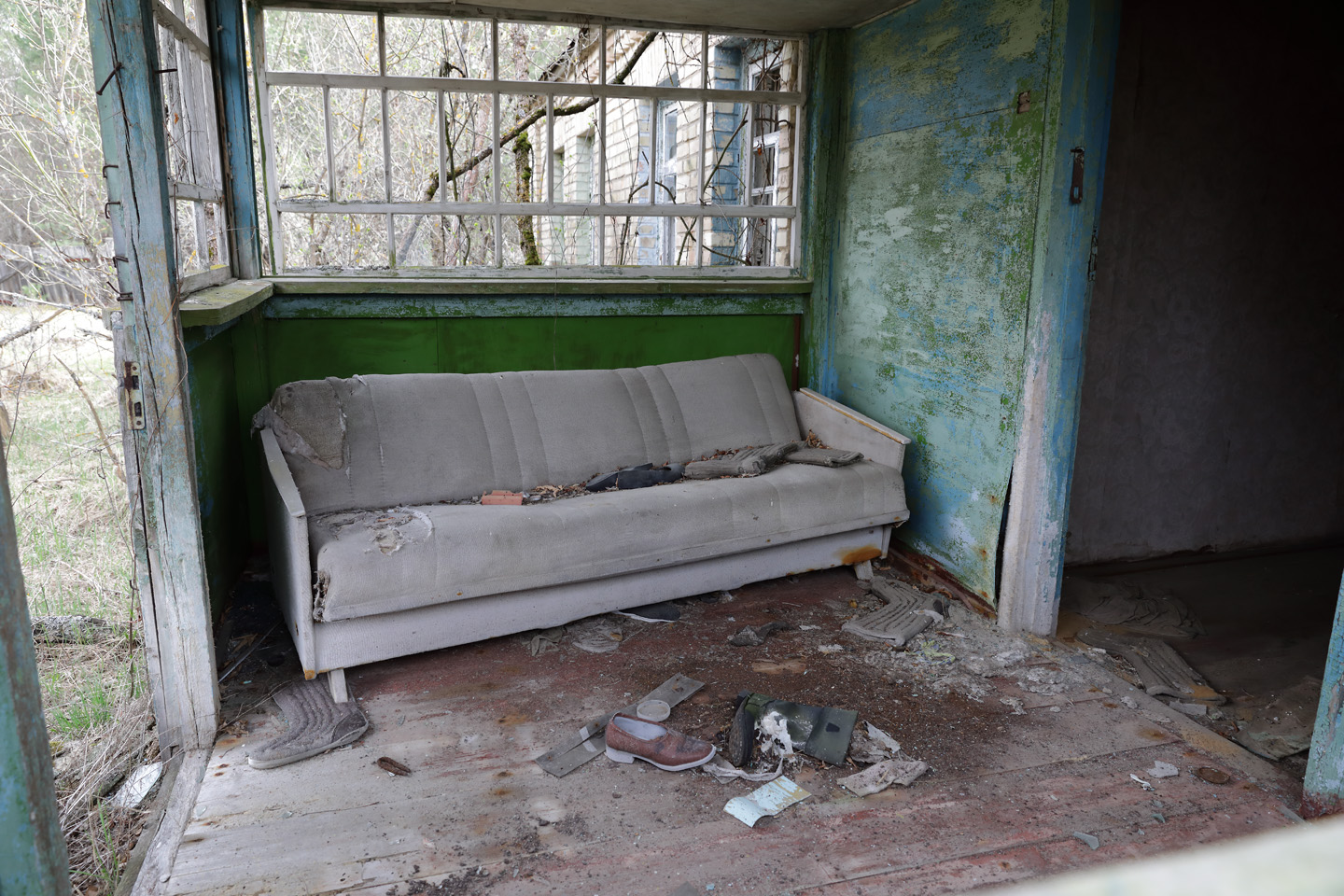 There is not many things left inside. In Soviet-Union people didn't have a lot of stuff in their houses. It's not like nowadays when wardrobes are full. In USSR brothers and sisters often wore each other clothes. This sofa was one of the most valuable possession of a family. 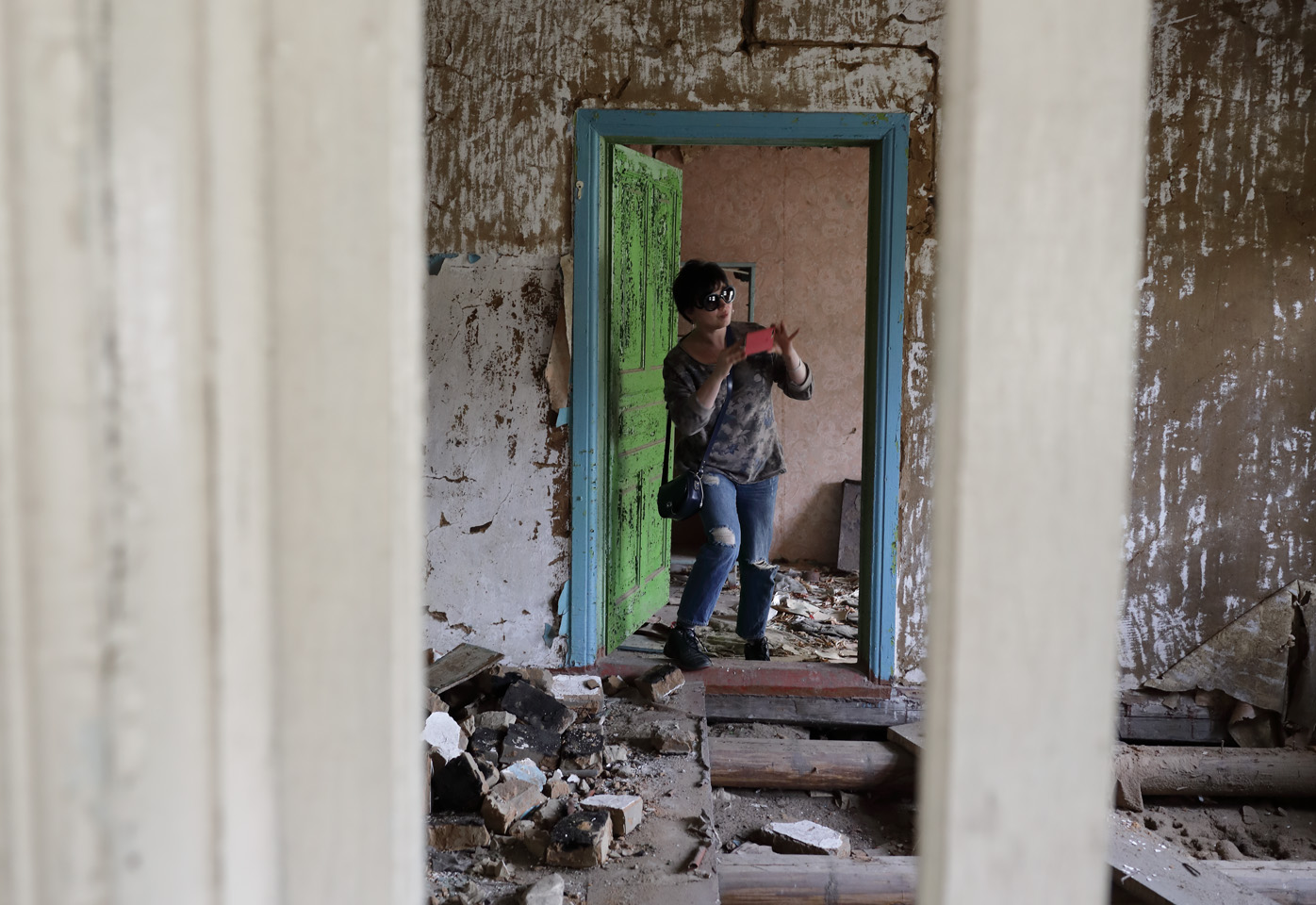 My friend picking up ideas for renovation at her home. She would like interior to match her jeans. Color would be easy, but it might cost a lot of money to copy the shredded look. 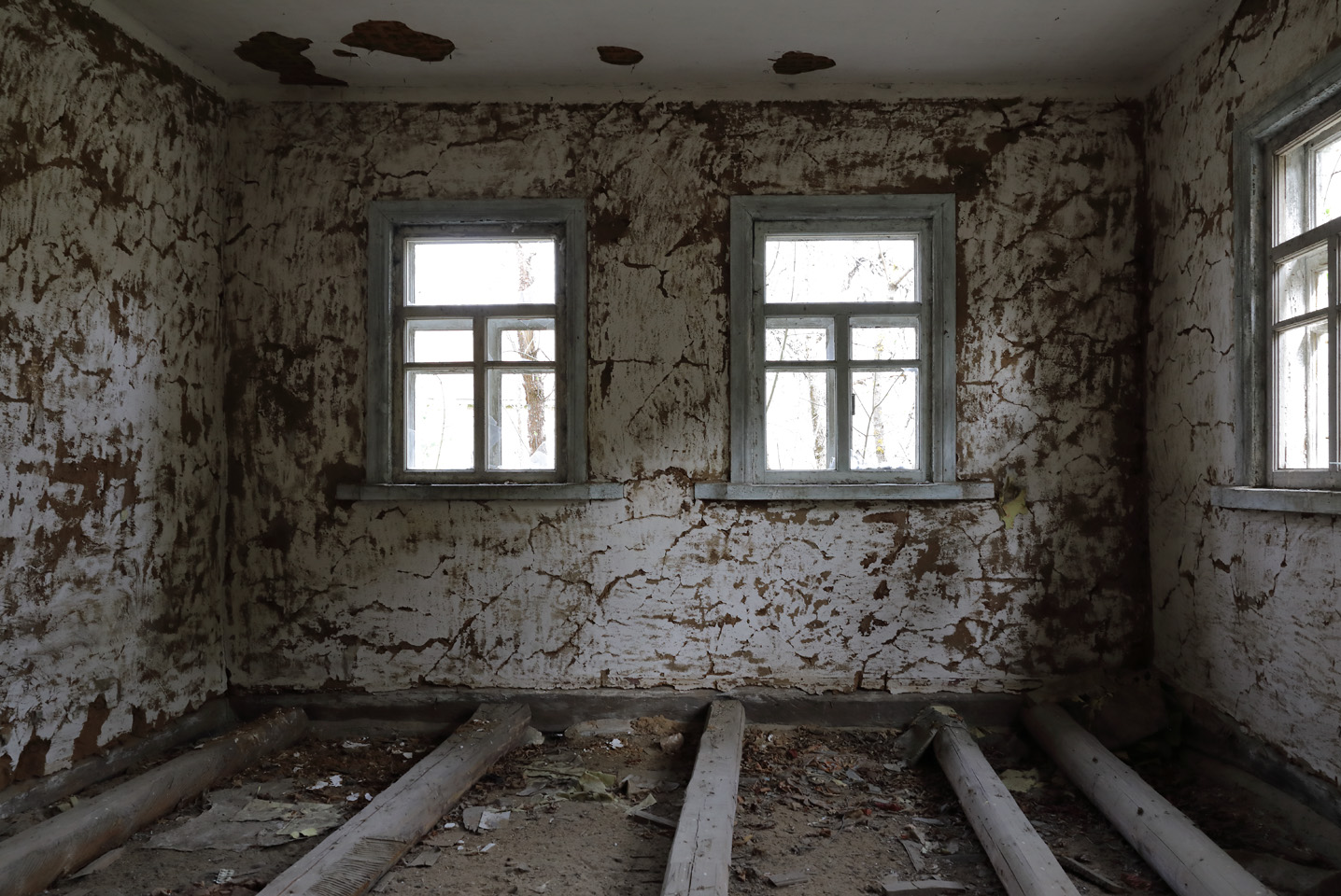 Designer would charge arm and leg for walls to look like this. In Chernobyl Mother Nature, the best designer, presents her works for free. Chernobyl is like the Louvre, you can walk through to enjoy masterpieces, but you cannot live there.